The greatest Interpretation International Festival in Romania had its debut on March 5th 1968 on the stage of Brașov Drama Theatre.  Part of the first team organising the first edition were personalities such as the festival directors Tudor Vornicu and Ilie Mănescu, the artistic director Valeriu Lazarov, orchestra conductor Sile Dinicu and the hosts of the show, actors Stela Popescu and Iurie Darie.

Constantin Drăghici opened the festival with a recital and the Romanian competitors were Dan Spătaru, Margareta Pâslaru and Anca Agemolu.

22 singers from 28 countries competed at that time in order to win the Trophy which finally went to Belgium with Jacques Hustin.

The event rapidly integrated in the agenda of the Grand International Festivals and its second edition was broadcasted by 25 televisions from all around the world. This was also the year when the first Trophy went to a Romanian competitor. It was awarded to Luminiţa Dobrescu  – she won the Golden Stag Trophy in 1969 with the song “Of, inimioara” – “Oh, little heart”. 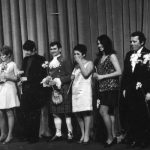 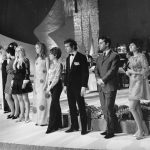 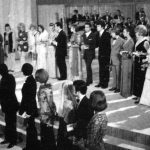 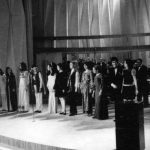 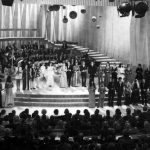 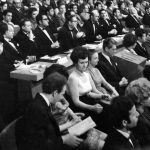 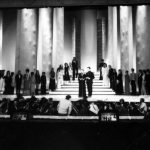 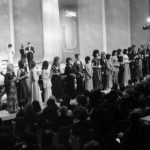 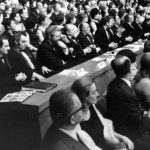 Therese Steinmetz (Netherlands) in 1970 and Anne Louise Hanson (Sweden) in 1971 are the winners of the following  editions.

In 1972, after four consecutive editions, the Festival stopped for 21 years, being organised again only 1992. The 5th edition of the event marked an important change in its history – instead of being organised indoors, the stage moved outdoors, in Brașov’s famous and beautiful Piaţa Sfatului.

After the Romanian Revolution in 1989, “Golden Stag” launched new stars in international music: Trie Utami (Indonesia), Arina (Lithuania), Worthy Davis (USA) and Cramps in The Leg (Russia), the winners of the Festival’s editions from 1992 to 1995.

In 1996, after 27 years of wanderings, the Stag came back home thanks to Monica Anghel.

Indonesia got the Trophy for the second time in 1997 with Meiske Shakila Sherhalawan. Then, there were another 3 years of interruption of the event.

The Festival comes back to life in 2001 with the performance of Romania’s representatives, the Proconsul band, who managed to convince the members of the jury that they deserve the Grand Trophy of the Golden Stag.

The Trophy remains at home for one more year thanks to the Paula Seling, Romania’s representative in 2002, who shattered all hopes for all the other competitors from all around the world.

2003 is the year when Chinese soloist Sho Baoliang wins the public, the jury and the Prize as well.

Eleanor Casar from Malta wins the “Golden Stag” Trophy in 2004.

In 2005, the Golden Stag Trophy went to Italy. Linda, born to a Romanian father and an Italian mother, has been compared many times to Anastacia, because of the resemblance of their voices. Her song, “Aria, sole, terra e mare”, has been appreciated even before the Golden Stag Festival, being awarded already at the famous San Remo Festival.

The Golden Stag 2008 stayed in Romania thanks to Razvan Krivach’s performance, who won the public’s sympathy and the votes of the jury with the song “Too much love will kill you”.

In 2009, the Golden Stag Trophy went to Italy with Antonino.

With a tradition of half a century, while becoming a national brand and a real ambassador of Romania, the Golden Stag is getting ready for its 18th edition in the year of Romania’ s Centenary.

The performances of the „Golden Stag” International Festival:

The winners of the „Golden Stag” Trophy